I get asked a lot by students what is the best way to buy a guitar, how much should they spend and how do they avoid being ripped off on an instrument that isn`t suitable for them or is a downright bad instrument.

Well, luckily I have tried out a lot of guitars and taught a lot of students (well over 100) all from scratch.

Most of the time these students didn`t have a guitar to practice on at all so they had to go and buy one quickly.

If they did have one, it was often one of those old rusty cheap things that was covered in dust and found in someone’s loft.

Either way, the student would need to get their hands on a good (or at least decent) guitar pretty quickly or they wouldn`t be able to practice.

Many of the guitarists I teach are students usually at college, university or school.

In this article, you`ll find out my best tips and specific advice I give to these students when looking for their first starter guitar.

A lot of students still get pestered by older and more experienced guitarists on which guitar they should buy. “You must buy a Fender” the older student quip, or  “Gibson’s are the only guitars I`d spend my money on”.

In the past, this sort of advice had logic as there was not a lot of competition for high-quality guitars. These days that couldn`t be further from the truth. There are so many great guitars made by brands most people, some even experienced guitarists, have never heard of.

Globalisation has been a wonderful thing for us guitar players. It means that there are a lot of superb guitars at a lower price than in previous eras. Guitars such as Yamaha, Stagg and Squier all make wonderful guitars and the price is much less than that of Gibson’s and Fenders.

I recommend you don`t get hung up on brand names. Instead, do your research, have an open mind and try each guitar on its merit. You will get more value that way.

2. Your first guitar can be cheap – once you can play, then invest

If you don`t currently have a guitar but are keen to learn, you have a couple of choices.

You can either buy a cheap guitar to get started on or you can invest a good chunk of money buying something really good that will last a long time. The choice is yours and I`m not here to influence you.

The only thing I`ll say though is that you don`t want to learn on one of those old rust-bucket guitars that your uncle has had in the loft for 30 years.

You would be much better off buying something like this Rocket starter pack. It comes with a few extras and will be at the very least a good guitar to start with.

Once you have had it for 6 months or so and can play some stuff on it, you can always sell it on (probably for a very small loss) and then get the expensive guitar you dream of – or you could just keep the Rocket.

The problem with buying an expensive guitar before you know how to play anything is that you won`t know if it suits you or not.

3. Consider going electric, even if you want to only play acoustic in the future

Most guitarists have a particular guitar in mind that they want to play before they ever pick one up. These are usually based on what their heroes play.

I have some advice which works great but you probably won`t have heard before. I recommend all guitarists start with an electric – even if they are only really interested in playing acoustics?

Well, there are multiple reasons…

Once you are at a reasonable level (which for most guitarists is about 6 months in) you can, of course, buy an acoustic and sell the electric to fund it but in all honesty, most of my students love owning an electric even if they are primarily acoustic players.

I often get asked a lot by students, either those from my teaching studio or on my guitar blog, which guitar should they invest their money in. Now, some students have a lot more than others to invest, but the best value for money guitar I have ever owned has to be my Yamaha Pacifica 112.

It is light, comfortable to play, is really well made, and has a wide variety of tones on offer due to the humbucker and 2 x single coil configuration.

This allows me to get some heavy sounds used by the likes of Nirvana and Artic Monkeys as well as much more mellow sounds in the style of The 1975 and Red Hot Chili Peppers.

I hope that article has helped you out and given you a nudge in the right direction. Whichever guitar you get, the most important thing is, just get on with the playing of it, and remember, have lots of fun! 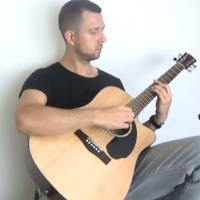 Dan Thorpe is a UK based guitar teacher, writer, and musician. He is the founder of Guitar Domination, a website specialising in guitar lessons for beginners - especially those who love fingerpicking and strumming guitar.

Guitar Vs Drums | Which is best to learn?

Arguably two of the coolest instruments, but when it’s Guitar vs Drums, who should win? If you’re torn...

How to teach yourself the guitar at home

The guitar is one of those instruments that many want to learn. Getting a teacher can be pricey and to teach...

Guitars For Education | A School’s Guide

Choosing the right instruments for the classroom is a crucial part of encouraging curricular and...